He recorded his debut album in 1978—the year I was born—but my first experience of Prince’s music was the Batman soundtrack, in 1989. Loved that film. Loved the soundtrack, too. I remember listening to it on my Walkman, at the age of 11, staring up at the ceiling and wondering what on earth a “lemon crush” was. I had no idea, but it sounded sexy. Not that I even knew what “sexy” meant at that age, of course…

A couple of years later, Julie—my second cousin, twice removed—came over from Australia to stay with my dad. She was a bit older, quite cool. I think maybe I had a bit of a (lemon) crush on her. Either way, she was the one who really got me into him. The Diamonds And Pearls album had just been released, and she played it incessantly—much to my dad’s bemusement. “He’s a bit weird, isn’t he?” said Geoff, referencing some footage he’d seen on TV. “Crawling naked all over the stage like that.” I don’t know. It didn’t seem weird to me—I was hooked. The lyrics to Cream and Gett Off… sheesh. To a thirteen year-old me, that stuff was gold.

Meanwhile, at school, everyone—including me—was getting into grunge. Nirvana, Pearl Jam. Soundgarden. Lumberjack shirts and growing our hair. Prince was my guilty pleasure. One day, during one of Mr Haines’ chemistry lessons, Chris Harrington revealed that he was a fan too, and lent me a copy of Lovesexy. No doubt the album’s cover art caused my dad to raise an eyebrow (more nakedness) but it confirmed two things for me: Prince was a genius, and Chris and I would be friends for life.

The years passed. Musical trends came and went. Prince changed his name to a symbol that nobody could either print or pronounce. He became known as The Artist Formerly Known as Prince (or TAFKAP, for short) and, then, in 2000, changed it back to Prince. He continued to release records, but the quality of his output had become, by all accounts, inconsistent. I say “by all accounts”, because my tastes had moved on by that point; I’d become a Kerrang! kid. My favourite band was—and probably still is—the Deftones, and I remember reading an interview with their frontman, Chino Moreno, in which he expounded on his love for Prince’s music. This surprised me: since when were the singers in metal bands into Prince? Whatever. I went out and bought a couple of his older albums—Purple Rain and Sign o’ the Times—and I was smitten once more.

A few more years passed. In 2007, Prince announced a string of dates at the O2 in London and I managed to get tickets for me and my then girlfriend, Karen. In a moment of pure synchronicity, we bumped into Chris Harrington and his sister, Jane, at the bar, beforehand. Chris later admitted that he’d always thought Raspberry Beret was called Strawberry Parade. Brilliant—but not as brilliant as Prince’s performance, in which he played for three thrilling hours on a circular stage, delivering hit after hit, barely stopping for breath between each song and clearly lost in some sort of ecstatic state for the entire affair.

After that, we lost touch again, but his place in my heart was secure. Upon hearing of his death, my initial reaction was one of oh, no… not again. Half of me was almost unsurprised, the other half didn’t actually believe it. A couple of hours and three bottles of lager later, it had started to sink in. And yeah. I cried.

There’s been a lot of talk of 2016 being a pretty crappy year so far—the number of our most cherished icons who have died since the beginning of January has seemed disproportionately high. And, as pessimistic as it sounds, I have a feeling there’ll be more reasons to grieve before the year’s out. C’est la vie. I’ve also noticed a bit of a backlash against the huge wave of public lament for the passing of these figures, but—and I’m borrowing from something the great Vanessa Veselka said last year when Cecil the lion was killed—personally, I reserve the right to mourn whoever and whatever I choose—be it a close friend, a living creature, or a pop star I never met.

Prince’s death saddened me as much as David Bowie’s—perhaps even more so—but I think it’s important to draw inspiration from these experiences, and from what we subsequently learn about these people, in order to become better people ourselves. I just discovered, for example, that Prince slept only three hours a night, and would regularly play music to himself, for hours on end, in the pursuit of transcendence. On one level this blew my mind, and made me realise I really need to up my game as a writer. On another level, though, it was completely unsurprising. After all, that’s what artists do. They don’t stop. They may also be considered “weird” or difficult, and the quality of their output may not always be consistent. Hell, they may even get naked a lot. But as Prince proved, ultimately, none of that matters too much. What matters is bringing joy into the world, creating memories, and doing it all with style and a smile. 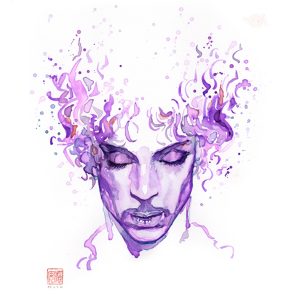 David is the New York Times Best Selling author of the KABUKI Graphic Novels, the writer and artist of Daredevil from Marvel Comics and The Shy Creatures, as well as the creator of the cover art on Chuck Palahniuk’s Fight Club 2. His portrait of Prince is far and away my favourite – prints are available using the link above, with a donation for each one sold going to charity.

Previous Post: « An Interview with… Richard Thomas
Next Post: 27 things the children in my class have learned this year »